Main light is a 10° super spot light , shoots a long distance at 761.2FT Feet. But it also still have some output for closer distance lighting.

Lights are built-in EMC for EMI/RFI protection, resolve the issue of radio interference and flickering

Great product but wires to short to reach back to front of shortbed truck, had to lengthen wires, no big deal, it got done, removed switch and installed remote receiver

I have these lights mounted on my John Deere Gator and they really light up the woods. They are sturdy and feel well made, I have no doubt they will hold up to rugged use.I would buy these again. 5 STARS

The media could not be loaded.

I replaced some smaller Nilight pods on my truck for these. They are much brighter and more lumens. They are a very broad flood light. The bolts/hardware to mount them didn't work for me, so had to visit the hardware store for shorter bolts that wouldn't hit my hood. 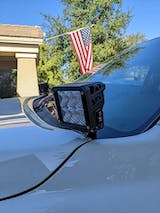 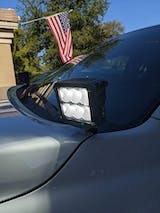 D
Duncan Hirthe
Mounted on my RZR and they put off good light.

Mounted these facing the rear of my RZR on the roll cage, use them when backing up or need to get something out of the box that is in the back, and they work great. They put off a good amount of light for them being pods, definitely glad I have them on my RZR.

4.5 / 5 (if only Amazon offered half stars)Despite the title of the review, these lights do seem to be constructed well. They have a nice amount of weight and I didn't spot any immediate problem areas for moisture intrusion. The main issue is the inconsistent LED chip placement in one of the lights, which is clearly illustrated in the second photo. Granted, it shouldn't affect the performance and you won't notice it once it's mounted, but the other light is perfect so the standard has been set.Some other minor nitpicks:- The brackets aren't stainless steel so if you live in the rust belt, plan on refinishing them after the first winter. On the bright side, the hardware itself is stainless, so that's less of a worry.- The mounting holes had a small amount of powder coat on the top few threads and it made it rather difficult to start the screws. They wanted to start on an angle, which could cross thread and strip out the hole.- The wiring harness isn't weather tight at all of the connections but that's not really a big deal as none of them are unless you're willing to spend exorbitant amounts. It's a quick and easy fix with a little silicone sealant and some heat shrink tubing.Other than that, I think these should do fine. Once I brave the freezing cold garage to get these mounted and wired, I will provide an update! 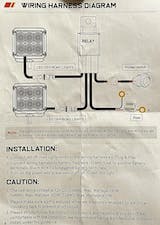 Better than expected in every way! Bigger, heavier, brighter! Easy to install and work great! If you are considering these lights look no further. You won’t be disappointed!

Great kit with super bright LED lights encased in a well construction housing.The wiring harness that comes with the unit appears to be very good making the installation of this lights relatively simple. 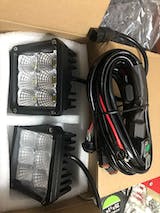 Lights, they’re solid, bright and work very well.These are much nicer than my $24.99 Amazon lights! Def worth every penny!One complaint, no covers! And manufacturer doesn’t sell covers that would def be a upscale if you guys made black and maybe amber coversWire harness is plenty long enough for a suburban! Connectors are solid everything about this even the hardware are 5 stars!

I would definitely recommend these lights. This is my second pair I have for my Jeep Wrangler and Dodge Ram. These lights are as bright as my 52" light bar. They also look sharp. I have had 3 different pairs of lights on my Jeep and these are the best one's.