Equipped with improved beam pattern for optimal light shape, Nilight LED headlights focuses down the road which contributes to seeing further and clearer with no dark spots, no shadow areas, no glare and no blinding to oncoming drivers

Nilight mission is committed to developing the brighter and not dazzling white light that puts your safety first. Seeing things at night get easier and clearer. Longer lifespan makes you to get rid of frequent bulb replacement. No more afraid of the darkness

IP67 level feature make it have an excellent performance on severe weather. Enabling drivers to drive safely in rainy, snowy, foggy, dusty weather. Easy to deal with a variety of situations in daily use

Holy smokes! Let there be light!!! I can see to drive at night again, Hallelujah!PROS:+ MUCH brighter than stock bulbs+ Light up the road at night+ Relatively easy to swap out old bulbs for these new ones+ Great quality

M
Mason Harrison
So far so good. Easy to install and bright

I installed these on a 2018 Subaru Outback. Definitely brighter than the stock halogen lights. Only time will tell on how long they last, so I'll update my review if any trouble occurs. But they installed really easily, and were well packaged.

s
sello Slabbert
This is a pretty sweet deal!

The difference these made was phenomenal. It went from, able to see a few feet, to, able to see a few dozen feet. The craftsmanship was sturdy and they feel like they're built to last. One slight inconvenience is they were a little difficult to install but, that really depends on your make and model. It has 3 of each bulb, 9005 and H11. When I got them I actually didn't realize they'd have a total of 6 lights. Seriously though if you and your significant other use the 9005 and/or H11 it's an amazing deal to convert both vehicles to LED lighting. I got lucky, I ordered for the 9005 and turns my other vehicle uses the H11. And as I said you get an extra one in case you need a quick change a burnt light on the road. I keep my spare in my glove box just in case.

I got this for the SUV, happy with light. Earlier it was yellow light and not in trend and bright. This LED light helped to that and got a super view at the same time it's not bothering the other vehicles.The manual and the product page in amazon help to locate the matching bulb, meaning hight beam, low beam and fog light. In first sight all will look same but it does have difference.Installed by myself, very good fittings great match and especially the wire provided to connect with car connector is really needed and helped to fit in tight areas. No issues or difference with original light connector and this one.All coming in 1 pack which is helpful and effective for the purchase too. No flickering when switching between the lights works perfect.Very satisfied with this LED light, also it has less noise coming out from the exhaust fan, I've the other LED lights that makes noticeable sound when the light is glowing. I would recommend this product. 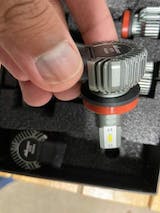 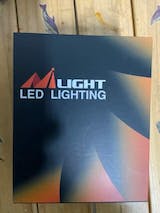 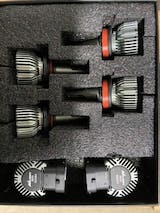 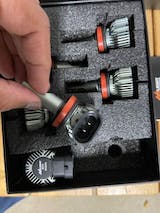 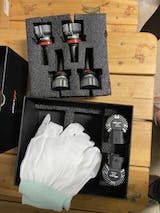 These were super easy to install and they look awesome. They are bright white and this will definitely help when it is dark. Nothing more to say, other than it is a great product, thought time will tell how long they last.

We got these lights for a 2019 Nissan Rogue. You can make sure these fit your vehicle easily by using Amazon's automotive parts reference "Manage Your Garage" which can be linked account. First off, they were super easy for my husband to install. Second, they are really bright just as advertised. As for the longevity, only time will tell. (The packaging says they are good for 50,000 hours--which is a long time). I would definitely recommend this item to a friend.

K
Kunti Parikh
Good bulbs, decent pattern, two were loose in housing. Watch out if your HB or LB are also your DLR

I got the 9005 H11 LED Headlight Bulbs H11/H8/H16 LED Fog Light Combo which Nilight says are compatible with our 2015 Subaru. They are in terms of size. But a huge number of Subarus, which is a large selling brand, as well as many other makes/models of vehicles, use their HB (high beam) or LB (low beams) as their DLRs (aka "driving lights" or "parking lights") and these will not work properly with them. In our Subaru DLRs are done by simply supplying 1/3 the voltage to the high beam. In a traditional halogen bulb this lowers the light output to 1/3 which is good for DLR. LED headlight bulbs however will have same output of light at 5 volts and 24 volts. Nilight support suggested a resistor, but a major seller of automotive LED should know this does not help since the LEDs are essentially binary: 1) off or 2) on at the same lumens no matter the voltage. That is why if you have a low battery on a halogen equipped car you will see lights brighten when you rev engine, but will not see a change if LED.Also lots of makes and models due to the vehicle's type of reflector. Will see lot of light over the cut off line after installing LED. All Subarus made before those started to come with LED, and LED optimized reflectors, in 2017 will have a lot of diffuse light over the cut-off which is a lousy pattern. We do. We can also see the LED diode pattern.That said, consumer reports rated the 2017 Subarus, with original halogen lights which is what we had, as the worst headlights of all passenger cars in 2017. So these LEDs seemed like an improvement due to the sheer volume of light -- until we realized the pattern was so bad and scattered with LED.After trying these LED, what we went with instead was hacking a set of high beam bulbs by dremmling out a tiny bit of the the plastic in the connector so we could use halogen high beam bulbs in low beams. That gives 60% more light, in an excellent pattern. That is way more light than stock, and a much better pattern than LED. It is also something that no law enforcement nor state vehicle inspection will ever figure out or take you to task for.So for many uses these LEDS are an objective improvement, but for some vehicles they are not.These are certainly worth a try. But take a picture of your lighting 30' from a wall or garage door before and after. If your pattern looks good with LED keep them in.

A
Ayebatari Osuagwu
30 min install well worth it

Bright! Not the blind other cars bright but where I can actually see both sides the road even with my dull lenses 5*

Put these in a 2019 Honda Ridgeline and they work great. A nice upgrade from the factory halogen lights.

I was able to use most of the bulbs even though I thought I was getting the right ones I did not look at the amazon fits. It did say it will not work with my Ram. I was able to do my headlights but not the fog lights as the connection needed to be the larger mount ring. The quality of these light is amazing that it is a plug and play. It took me more time removing my light fixture than the actual time to install these in the vehicle. I checked them out and everything looked good. Drove into work this morning and it was dark so I actually was able to put them to the test. The lights are a bright white and not the amber color. Also the high beams were amazing on the brightness that they created. I fell as I have been missing out on seeing better in the dark. I do like the fact that you also have a small fan in the back to keep the lights cool as well. Great light setup overall and make sure to check the amazon fits to make sure you do not make the same mistake I did.