This dual-slot add-a-circuit fuse holder provides a fuse slot for the existing OEM circuit and a second slot with a 15A blade fuse for a new circuit.

Made of high-quality nylon plastic, anti-wear, and anti-corrosion, very sturdy and durable; the thermoplastic-insulated wire is high temperature and melting resistant.

I needed one fuse tap to connect some led lights. These things are usually $4-$6 depending on where you get them. This is an awesome value. 10 pieces for $11! Make sure to check all crimps for tightness. All of mine had a little play and one butt connector came off. See pic. For my use, I was going to remove the butt connector anyway.

S
Sage Emard
Works with relay for a keyed control

Bought the fuse tap primarily for helping switch an always on power outlet in a Ford Fusion to something that was only on with the car keys in the ignition. Since the ford fusion doesn't have many fuses that are tied to the ignition, I used this tap to control a relay to control the power on the 12v outlets. Fuses were stiff, which while a little annoying when I was having to figure out which fuse would be bet to tap into and having to change amperages, it's good to know they'll stay in place after I finished the modifications. Overall, easy to install, and the only big issues were related to the rest of the car (like needing to trim the plastic fuse box cover a bit to accommodate the fuse tap)Cost of these was nice, certainly better than the ones at an automotive store, and having a few extras could be nice to have when I work on adding a dash cam and other small car mods I'm thinking about

Worked well for my project of installing a backup camera in my car. I would have rated it 5 stars but it just came in a plastic bag and didn’t have any instructions as to which fuse slot was which. I had to use a meter to determine which of the 2 slots to use. The outer one in direct line with the wire hanging down is the extra fuse for the new circuit. The original fuse you removed to put this wire in it’s place, that original fuse goes in the slot closest to the plug-in that goes to the fuse block.I got these after watching an installation video and a guy used these cables, before that I never knew they existed!I really like the right angle aspect of this even though it’s kind of tight in the small ATM/mini ATM fuse blocks in modern cars.In my pic, I used the heated seats fuse which isn’t connected since I have no heated seats and was rated at higher amperage than I’m using. The pic I included is the best way to run the positive wire and runs past a ground point (mounting bracket) but there are no rough edges (Nissan did a good job there and the other places in the trunk lid where I ran wires for my project-no rough edges!) 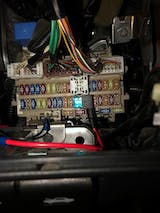