provided maximum illuminate coverage and be visible from a greater distance. Visible in daylight, midnight, rainy, foggy, or snow days.

Made of durable ABS housing, crystal clear housing for max brightness, scratch-resistant PC lens. This mini strobe light is packed with 24 High-Intensity LEDs that are designed with 360 Degrees of Coverage lens, magnifying their brightness, and sure to get the attention of anyone passing by.

The bottom of the LED has 5 powerful magnets to adsorb on any vehicle's metal exterior roof, very quick to mount. Protective rubber feet make car surfaces won't get scratched.

Equipped with screws that can be fixed to the roof, make led stay in place even at 60 MPH. My son is a subcontractor truck driver and uses the strobe light when he parks his truck on the side of the road. He said it's easy to mount and remove. The magnets are strong and the light stays in place. The light bright with good visibility. Cord is long enough to reach to multiple spots on his truck. Once done, the strobe light is compact enough to fit it the glove box. It's compact but huge in functionality.

The light is a little smaller than I expected, but it is brighter than I imagined. It plugs right into your car, and has two switches, one for on/off and one toggles about 5 settings. Flashing clockwise, counter clock wise, pulsing, etc. You can place it on your dash, or on top of your car as it has an built in magnet, which was a nice surprise. Overall it’s a great little light that works very well for the price.

Very Bright strobe light. When you broke down on the road. You want other drivers to see you at least a miles away. This is it.Thank you for dropping by. 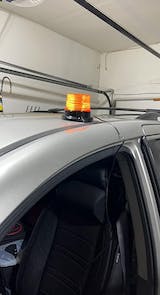 E
Elmo Nienow
Decent light with a couple improvements over my last...

I got this light as a replacement for an older amber strobe on my plow truck.For context, I use it to comply with my state's laws for a flashing amber light while plowing proximal to the roadway (my driveway only- I don't plow commercially).The cord is long enough that I can plug it in to the 12v socket on the dash and run it out to the back window, where it sits atop my headache rack.There are a number of different strobe functions/intensities that you can choose from. For me this is nice, as I have the ability to select the least annoying one possible; however, if you were looking for maximum visibility there are also plenty of different settings.Two features that stood out to me compared to my previous strobe of similar design:1. The cord is routed through an opening in the base. My old strobe was run through an open grommet and ended up coming loose and pulling out after a couple of snow seasons. With this one captured in the base it is less prone to being pinched or falling out entirely.2. My previous strobe also had a magnetic base, but was covered with a layer of foam which reduced the strength of the magnet, and resulted in it falling off once in a while. This light uses a rubber base that almost looks like a suction cup, and brings the magnet much closer. It feels much more secure.Overall, this light seems like it will do what I want it to no problem, and the pricepoint is good. In a couple of months I'll be able to get a better idea of how it performs when the snow is flying!

This works great! I plan to use it on my snowblower when working in or near the road.Simply plug it into a cigarette plug. There are 2 switches. 1 is the power switch and the other cycles through the several built in light patterns.This is specified to run on 12V to 24V. Mine started working about 6V and ran fine when I applied 24V.

S
Sydni Kulas
Easy to use/keep in my car for emergency.

I find this to be a very easy to use unit. I keep it in my car just in case I break down and need to use it as more of a hazard light. Plug it in and turn it on. Has one switch for power and one switch to rotate through the different flashing modes. It has a nice magnetic base to it which attaches to the top of my car with no problem. Cord is long enough to work just fine. Plugs in to your standard cigarette lighter/12v plug. Great to have. Very bright and easy to see from a distance.

I purchased this strobe for my snowplow truck and for trailers that I am pulling, with vehicles on them.I like that this is small and portable, and has a long cord, that will work on the cab of your pickup, and it will also reach back to a vehicle on a trailer that you are pulling.It is made of plastic, but looks like it will last a long time, if taken care of properly.The Led lights are very bright and will not draw a lot of power from your batteries.I like that is has a very nice selection of different strobe light patterns.The magnets are more than adequate, to keep the strobe attached to the roof of your vehicle. 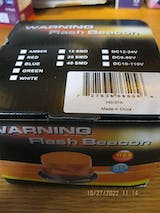 Plugged this into the 12V port in my car, and I'm impressed with the brightness for the price. The controls consist of a switch to turn it on/off, along with a toggle switch to go through the different flashing modes. The rubber gasket along with the magnets boardered by plastic seem to keep it from scratching my car's paint. The magnets are also strong enough so that it stays securely in place while I'm driving with it on. Cable is very long and you shouldn't have a problem sticking it wherever your 12v port is.The actual LEDs inside are a white light, which is then filtered through a amber plastic housing. It was still bright, but they aren't amber-colored LEDs. Overall, very happy with this light. 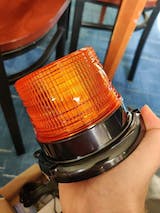 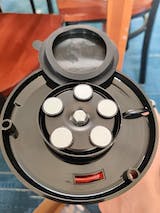 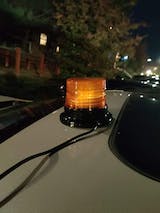 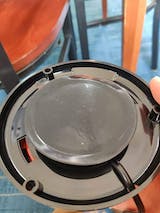 This is a good way to get attention of fellow drivers if you have had an accident or some other issue on the road - you can tell the tow truck driver, or the 911 dispatcher or whatever, to look for your emergency beacon, so they can come help.

I like this safety light a lot. It has magnets so you can just pop it on the roof when you need it, and put it away when you do not. I am keeping the box it came in as a storage box and leave it in the trunk of my car. I tow my car behind an RV and having a light on top to warn people if it is dark out that there is a black car behind the RV helps insure it does not get hit by someone who does not see it in the dark. I also like that you can change up the pattern of the lights. I would buy again.